The Hellyer Velodrome Board has a number of projects underway in various stages. Take a read at what we have going on.

PAINTING PROJECT: There is usually a painting project(s) of some kind every year at the Velodrome.  Our current 2020 painting project is to repaint the blue band, the wide white finish line and the judges stand. Included with painting the blue band is sealing the cracks beneath the blue band span (the lesser sloped section of the track).  This project was about to get started on March 19th but the SIP announcements a few days earlier put it on hold. We’re looking forward to kicking this off when things open up again.

RENTAL FLEET OVERHAUL: Thanks to Fergus and Chris Bonilla for taking on a project to rebuild the bikes, standardize the gearing and bar/stem setup (yet scale for the smaller bikes).  The bikes will also be powder coated to give them a face lift as well as color code according to size.  This project is underway.

LOCKS and KEYS: We are in the process of purchasing new locks which will all be keyed the same.  The old lock set will be rekeyed and held in reserve for quicker switch over in the future.

SPONSORS: All of our sponsorships that are expiring soon have been extended through 2020 at no cost.  We’re thankful to have established sponsorships with Team Fremont, Bianchi USA and Hammer Nutrition in early 2020 before the shutdowns. 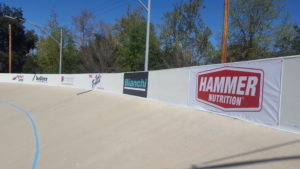 SQUIRREL ABATEMENT: You may have noticed in the recent pictures of the rail boards that the gap between the rail boards and the track has been Closed. This is the first of many steps in this project. The next step is the County will be getting rid of the squirrels using their standard animal damage controls. Their areas of concern are not only the track interior but the berm around the outside of the track and the hillside by the solar farm. They’ve received estimates from three contractors and we all hope this will get going soon!

FIRST AID SUPPLIES: The first aid supplies in the Office have been replenished and the Supervisors have all been notified. The supplies will be regularly inspected (for quantity & expiration) when the monthly AED check-up is performed.

CATS HILL EXPO: Another project that was cancelled just days before happening was our Cats Hill Expo Booth. The Hellyer Velodrome purchased an Expo spot and contributed some primes to the race. We chose to do this to support the event and its sponsors: San Jose Bicycle Club, Mike’s Bikes and the Los Gatos Bicycle Racing Club – all of which are Velodrome sponsors. We were planning to hand out flyers and get some donations in return for Hellyer water bottles and of course – spread the word about track racing.  Lets hope this race is held later in the year, when we have some Tshirts to sell too.

TSHIRT CONTEST: As most of you know this project is underway. Next up is production then distribution. We’re planning to make this an annual activity.

That’s a quick summary of our current Board projects. Of course there are many smaller work items and future projects being worked on all the time. We really wish we were kicking off our race season in grand fashion right now but that’s not the case. We’re doing our best to be ready to Get After It when things open up again!

Thanks everyone, stay safe.